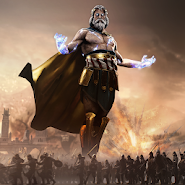 Dawn of Titans (Dawn of the titans) – very interesting and addictive strategy game on Android. Collect a powerful army with thousands of warriors. Train your titans and enter them into a war! Absorb the enemy land and destroy their army in real-time

18.09.2020 - New titans and relics for Halloween and the game's birthday
- Improved daily login rewards
- New collections added to the Pantheon of Titans
- Reduced the cost of building and improving troops in the early stages of the game
- Improved battles in the Arena and Monument; more titanium experience
Files:

3.03.2020 - A brand new Pantheon of the Titans is coming soon ...
- The community-invented titan, BABA YAGA, is already here!
- Support for a new union event to be held in the coming months.
- Additional 5 * relics with unique effects.
- New titanium skills and relic effects that add fresh momentum to battles.
- Changes in the balance of troops (see the blog for details).
Files:

Similar on Dawn of Titans

Comments to Dawn of Titans on Android