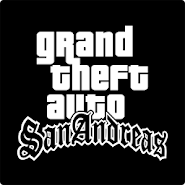 Grand Theft Auto: San Andreas (GTA San Andreas) – you already know that this game moved from the PC. And not just moved, but also brought a lot of improvements, from graphics quality, to the variety of cars. Mobile Android version has an extended storyline. It tells about the adventures of Carl Johnson, who once fled from Los Santos. Now it he discovered a new city in GTA SA.

The well-developed characters of the heroes will be remembered for a long time, and some dialogues can be pulled apart into quotes - they are so good! Let's go back to the gameplay in the game itself. Compared to the previous part, the scale of the open world is simply impressive. If you are bored of the main missions, you can always just take a ride around the city, go to the rocking chair, go on a date with a beautiful girlfriend, or just eat your belly. There is always a turbo jet pack for the crazy.

Install Apk Zombie Mod
Install Apk CLEO
Unzip cache #1 to /Android/obb/
Unzip cache #2 to /Android/data/
Launch the CLEO SA application, select the SA item then Install scripts and install the scripts you need
Run the game itself
The cheat panel opens with a quick swipe down

How to remove artifacts:

- you need to have Root rights and will not always work
- Edit the file to change the traffic on the roads, in the end, the world of lost people, but with them and the artifacts (the artifacts are due to cars).

Codes on cars and other transport:
AQVQIMAHA - all the settings of your machine to the maximum
XICWMD - invisible car
PGGOMOY - perfect handling
BGKGTJH - on the streets I drive only cheap cars
GUSNHDE - on the streets travel only expensive cars
CPKTNWT - explode all machines
LLQPFBN - pink cars
IOWDLAC - black cars
RIPAZHA - cars fly
BMTPWHR - rural cars and pedestrians
FVTMNBZ - ride around the city only rural machine
THGLOJ - reduced traffic on the streets
COXEFGU - all cars have nitro boosts
VKYPQCF - all taxis have nitro
BSXSGGC - cars fly away when hitting