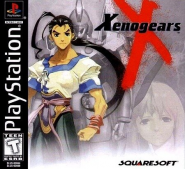 Xenogears - The simultaneous existence of friendship and enmity, love and betrayal, disputes and intrigues, are a complex phenomenon, the same as a divided planet into two different states. The current situation is completely changed by recent excavations on which weapons of an ancient civilization were found. After such news, the state of the possessions of the states depends on who will be able to get this very weapon. Control over the whole world can only be obtained by someone who shows what he is capable of for the sake of obtaining a legendary artifact.

Comments to Xenogears on PS