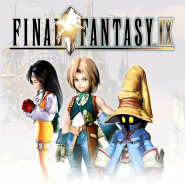 Final Fantasy IX - The Tantalus theater group along with Zidane kidnap Garnet, the real princess, during her birthday. At the age of 16, she turns out to be very smart, and she herself admits that she has long been plotting an escape to Lindblum to Regent Sid. During an attempt to escape from Alexandria, a theatrical airship crashes in an Ominous Forest due to some damage. Support the princess in her most difficult periods, and help her successfully get to her destination before something really terrible happens in the forest.