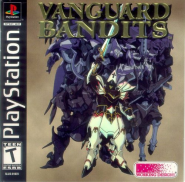 Vanguard Bandits - Waking up in a high-tech world, you will see that now the battles for power take place with the help of created robots, and not ordinary warriors. The empire, led by the general, sowed fear on the land, and then only the rebels managed to oppose such influence and start fighting for a new order. Take possession of some elemental stones to get a large set of unlocked attacks and experiment with their use during battles. You will not only have to fight, but also complete 60 tasks and make a choice to get one of the 5 endings.

Comments to Vanguard Bandits on PS