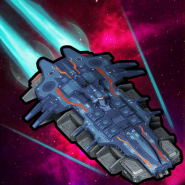 Star Traders: Frontiers – an epic space RPG for IOS, rich in adventures and battles. In this game you will control a space ship and act as captain. Command your crew and explore the galaxy, destroyed by internal strife, foreign threats and political intrigue. In this game you will be able to choose who you be – a pirate that terrorized the sea route, in the role of a military captain who will fight on the side of the solar troops or to act as a bounty hunter. Explore the vast cosmic universe and upgrade and improve your ship.