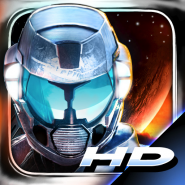 N. O. V. A. (Near Orbit Vanguard Alliance) – action shooter on Android for all lovers of three-dimensional shooters. The action takes place in the distant future, when due to regular natural disasters and destroyed the atmosphere life on earth became impossible, mankind is forced to build orbital space colonies and leave earth.

for a time all was well, the colonies flourished, more were built satellites, this colonization was named as the Alliance of Nova. But due to the relocation of the defence was weak and they were interested in aliens Judges, who decided to take over the colony in their hands. The colony starts with a quick preparation for war, constructed a defensive tower, and decide to go check the best retired infantryman Kal Wardin to infiltrate behind enemy lines and destroying the main think tank.

the First truly beautiful fantasy shooter. Arsenal of weapons in the game is very large, assault rifle, shotgun, sniper rifle, beam weapons, grenades, won't let you get bored on the battlefield in front of large crowds of attacking enemies. Because the opponents are different and behave differently, will have to use different combat tactics.

Great graphics and music with various special effects make the atmosphere of the game the game unique and addictive. 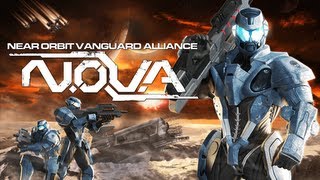 Cache for N.O.V.A. 2 - Near Orbit Vanguard Alliance: unzip the folder to /Android/
- path will look like this: /Android/gameloft/
- install apk, launch the game!