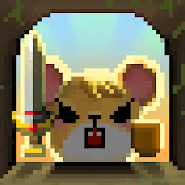 the Heroic hamsters and the Magic tower When the famine had reached a small village, the villagers tried to invent a new kind of flower, but something went wrong and they were in the Demonic world. From the portal came out evil monsters, they got the magic tower and began to attack the village. Find a special hamster who will find out your hidden abilities and save the whole world. One he can not cope, for comparison forces need a team, so pick up companions and go into battle! Gradually move along the floors of the tower and clear way.

Similar on Hamster Hero & The Tower of Magic - Idle RPG