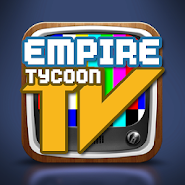 Empire TV Tycoon - Take under your own leadership the further promotion of the TV channel in order to attract as many people as possible and become a rich businessman. To begin with, you can include ready—made programs, movies, series or shows, and when a sponsor or money appears, you can attract various actors and shoot TV programs. Analyze your current audience and broadcast what they like, so your channel will be in demand and you will be able to sign more contracts. In the process, you will not only be able to compete with other TV companies, but also participate in contests to receive special awards.