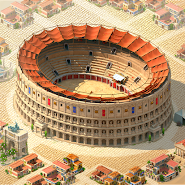 Empire City: Build an empire! - Get into the period of the real heyday of many civilizations to leave your own mark in history and learn more about life in ancient times. Every empire needs economic development, a military unit, support for the maintenance of territories and the well-being of its people, so the authorities have to constantly make deliberate choices that affect the course of events. Influence your own empire the way you want, as you have complete freedom of choice and actions to implement. Build, fight and destroy!

Comments to Empire City: Build and Conquer on Android