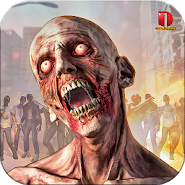 Dead Target Zombie Killer Survival – zombie-shooter for Android where you will clean the city from zombies. Under the guidance of biologists, scientists developed a new formula that has shown good results and it was believed that she could cure deadly diseases. But in a secret lab where scientists are working something went wrong and the animals which are experimented suddenly become aggressive. The virus broke out and began to spread very quickly among the locals. All who came in contact with zombies also turned into them. Stop this epidemic by taking up arms and destroying zombies. As the game progresses, upgrade your hero and unlock new types of weapons and ammunition.