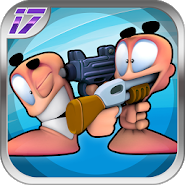 Worms 2: Armageddon – worms favorite is now in your Android! In the second part of battle of worms most notably animation and beautiful graphics, which is simply mesmerizing. The game became even more varied weapons, and new locations! You can play in survival mode, test your endurance, agility and luck, and fight with friends in multiplayer. And finally, you can play with any player around the world via the Internet! Plenty of positive emotions and good mood will give you game is not for one hour!

Cache for Worms 2: Armageddon: unzip the folder to /Android/obb/
- path will look like this: /Android/obb/com.worms2armageddon.app/
- install apk, launch the game!

Cache for Worms 2: Armageddon: unzip the folder to /Android/obb/
- path will look like this: /Android/obb/com.worms2armageddon.app/
- install apk, launch the game!

Comments to Worms 2: Armageddon on Android