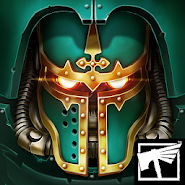 Warhammer 40,000: Freeblade - the continuation of a series of action games on the legendary Warhammer universe. At this time you have to take on the role of Imperial knight, fighting the forces of chaos. The dark forces attacking the planet the main character and remains nothing how to join the Legion "Dark Angels" to help the resistance forces.
the game is divided into more than 170 missions, passing that you will be using a variety of weapons to destroy waves of attackers.
Gameplay is quite simple, aim the crosshair at the enemy and hit the trigger, and a powerful combat robot will do the rest. Of course, the developers added the possibility of improving the fur, creating your own weapons and much more. It is worth noting and highly detailed graphics.

Cache for Warhammer 40,000: Freeblade: unzip the folder to /Android/obb/
- path will look like this: /Android/obb/com.pixeltoys.freeblade/
- install apk, launch the game!

Comments to Warhammer 40,000: Freeblade on Android