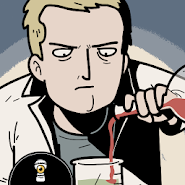 Unwanted experiment – an exciting puzzle game for Android where you will escape from the lab. In the game you will play the role of a young man named Eric that he did not believe the rumors about a scientist who arrived in your city. Eric snuck as close as possible to a home scientist, and was discovered by its owner. After which our hero was placed in a dark basement and now he needed to get out of there or he will be subject to terrible experiments. Solve numerous puzzles and tasks, move to different locations and interact with different objects. Try to leave the house of the scientist as quickly as possible.

Comments to Unwanted Experiment on Android