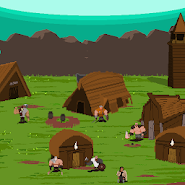 Build a real Kingdom of the Vikings! Enjoy the atmosphere of the people and become a part of history by performing the required action of the city. Collect the best team of Vikings and enemies in ruthless battles, expand your settlements and build new buildings, conduct experiments in the sea and learn how to manage the fleet. The Vikings not only captured the treasure, but his forces were mined for gold and other resources in the mines! Sooner or later, you will try to protect its people, as well as make your character.

Comments to The Last Vikings Kingdom: City Builder on Android