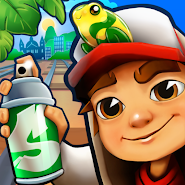 Subway Surfers (Subway Surf) on Android - a game of the genre of runners. Cheerful and cheerful kid named Jake painted drab railroad in bright and saturated colors, creating a masterpiece of street sketches. However, this is not at all appreciated by the police. And now the hero has to run away with all his might from the pursuit of a policeman and his dog. The road is not easy, because you have to jump over the tracks and trains, around obstacles on the right and left, as well as sliding over power lines of moving trains. A lot of dangers, and the main one - breathing in the back - the police chase! But it's not all that bad. Running away, on the way you can collect different bonuses, as well as coins, which can then be wisely spent to upgrade your image, namely: skateboard, jetpack and other attributes of clothing and equipment, which will help a lot in overcoming obstacles and dangers! Good luck in the chase and remember - the reaction and agility - that's your trump card!

Comments to Subway Surfers on Android