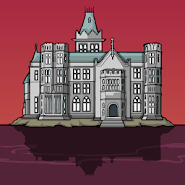 Rusty Lake Hotel - detective quest with unique game mechanics. This project formed one of the most famous literary works of the detective genre.
Plot Rusty Lake Hotel is developed on an island the boat arrives with the main characters, and this is the way animals. On the island in addition to small hotels are now empty and all the events and actions are developed in six rooms. The gameplay is as follows, the characters live their life, walk, eat, communicate, and in this time strange things happen to understand that you have to. The main features of the game include an atmosphere of total uncertainty, which will not release the player until the last minute. But the surreal graphics and well-chosen soundtrack only accentuate the unreality.