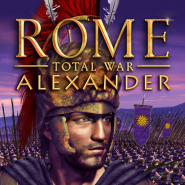 ROME: Total War - Alexander - embark on the conquest of the Persian Empire as Alexander the Great - king and commander of Macedonia in Greece. Promote your troops through the land of Central Asia, devastating the Persian Empire and approaching nearer to the goal. Under your command are more than 50 groups, and the Macedonian cavalry retinue.