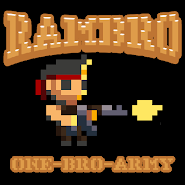 Rambro: One Bro Army - Are you facing an entire army of enemy forces on tanks or various armored vehicles using a conventional machine gun in your hands? The enemy commanders ordered them not to spare anyone who gets in their way, but they are traveling with bad intentions, and you are defending the freedom of humanity, so your forces are much better. Dodge obstacles that suddenly appear on the road to avoid your own death, and if one of the enemies comes too close to you, use a spare knife to neutralize it.

Similar on Rambro: One Bro Army

Comments to Rambro: One Bro Army on Android