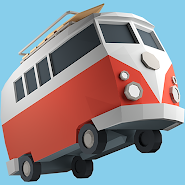 Poly Bridge 2 is the sequel to the hit indie game about building bridges with an honest calculation of "physics", where you can spend many hours. New levels, new mechanics, special physics engine and much more! Develop the engineering ingenuity — you have to spend many hours for solving fascinating puzzles. Try to take new heights and soar to victory. The game has a new element — spring. Now the bridges will become more intricate.

this time the developers have outdone themselves and created a special physics engine, optimized and tweaked specifically for the simulation of the bridges. Thanks to the precision and predictability, it guarantees the same outcome of the simulation for each user, so that the game can sustain its competitive aspect.

Comments to Poly Bridge 2 on Android