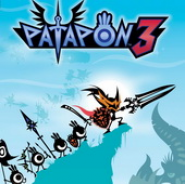 PATAPON 3 – the sequel to the popular music games for the PSP, where you will be helping flame Pataponov to fight with horrible monsters. The second part ended on the fact that brave the flames crossed the last bridge and on their way was a huge chest, after a short effort they opened it. It turned out that the chest was locked seven evil spirits, who have turned almost all the heroes in the stones. The remaining heroes found at the bottom of the chest of unimaginable power, which will allow them to defeat all the monsters that stood in their way. Travel through numerous worlds of the music fight with the enemies. Defeat all the monsters and free his characters from captivity.

Comments to PATAPON 3 on PSP