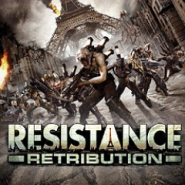 Resistance: Retribution - the story of a British marine who takes revenge on the Corporation that destroyed his family. The company Chimera invented the method by which it is possible to subject the conversion of the people, and our main character whose name is James Grayson decided to fall on them hail and not only save a lot of people, but also revenge. You are waiting for an exciting shootout in the center of Europe, as well as a whole bunch of robots and weapons.

Comments to Resistance: Retribution on PSP