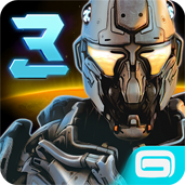 N. O. V. A. 3: Freedom is one of the most addictive space shooter now on your android device! You will have to death to fight for the survival of an entire species - mankind! It's only been four months since cal defeated the Volterites, President Folsom is assassinated and the beleaguered colonies passed under the protectorate Volterite. Since then, Kal hiding in the most remote corners of the galaxy, but the message from Yelena calls him back to Earth...

Cache for N.O.V.A. 3: Свобода: unzip the folder to /Android/obb/
- path will look like this: /Android/obb/com.gameloft.android.ANMP.GloftNAHM/
- install apk, launch the game!

Comments to N.O.V.A. 3: Freedom on Android