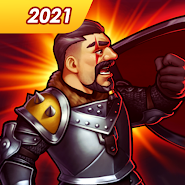 Hero Tournament: fantasy mmo rpg - The cherished battles and tournaments for precious rewards will take place soon, try to avoid the power of the gods and become exactly the hero everyone has been waiting for. Become face to face with your enemies, defeat not only wards, but also bosses, experiment on different combinations of punishments for opponents, unite with other players in clans and act together. Choose which guild you belong to, because it will play an important role in team battles on the battlefields. Win the title of champion and become the best!

Comments to Legend of Eden: fantasy MMO RPG! on Android