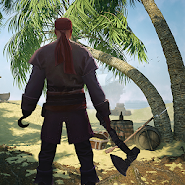 In recent games on the theme of survival in various conditions increasingly appear on mobile platforms and here we have another version on this theme, the project went under the name of the Last Pirate: Island Survival. And so, according to the authors, you have to play the role of a pirate whose ship was wrecked and its chip, and the whole team nailed to the mystical island which was populated by various monsters and now you have to try to survive as long as possible and destroy the maximum number of creatures.

Comments to The Last Pirate: Island Survival on Android