Kingdom Defense 2 Empire Warriors - the continuation of a series of tactical strategies of a series of tower defense made in a fantasy style. In General, this project was executed in the usual style of the genre, but the developers used some interesting solutions such as the ability to hire and train additional warriors, as well as challenge various large shocks, this approach will allow you to more fully use the capabilities of your troops. Otherwise, your task to prevent the capture of your base and to destroy as many orcs, elves and other vermin. 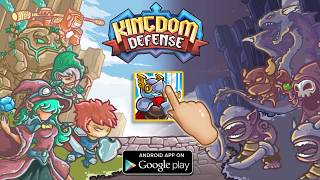