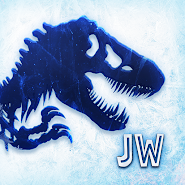 Jurassic World - Game on Android from the developers of Jurassic Park: Builder. Inspired by the movie "Jurassic World". In this game you are again going back to the island Nublar. More than 50 kinds of dinosaurs come to life that would fight in mortal combat in the arena. Build the amusement Park of the future, grow and create new types of dinosaurs and battle! To grow a team of winners battle arena, you need to construct the most effective Park, which will allow the dinosaurs to flourish.

Comments to Jurassic World on Android