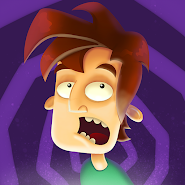 Infamous Machine - point and click adventure game with a humorous plot, events that evolve around the three main characters, a scientist named Edwin Lupin and two of his technicians lovely Lisa and Kelvin - that is you. Your scientific mentor spent a huge amount of time and effort on creating a working time machine and that is characterized by the device worked. In the end, however, the invention of Dr. was like a shower stall that caused no little ridicule from the scientific community. Frustrated to the core Edwin Lupin goes back in time in order to prevent the famous scholars and outstanding personalities just to make their discoveries and achievements, and thereby change the course of history to draw attention to yourself. You also have nothing left to do but to go in the Wake of mentor and stop him.

Comments to Infamous Machine on Android