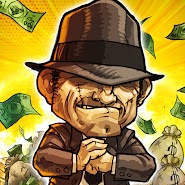 Idle Mafia Boss – is an economic simulator of the mafia boss. The action takes place in new York city, in times of crisis, unemployment and prohibitions. The player begins his journey to be an ordinary loser, but aims to become the leader of a criminal gang, and later the entire city. In the beginning you are committing small crimes to save a little money, then fighters and managers create new jobs. Your initial goal to capture the area all establishments that generate income. Gradually expand its zone of influence for the entire city. The game has very nice graphics and simple straightforward mechanics. Properly organizing your business, you can earn income even when you are not in the game.