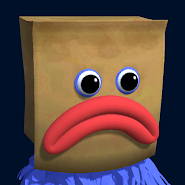 Hagi Vagi - The terrible forest haunts only those who are really afraid of the dark! Run away from Hagi Vaga, who ran away from the toy factory without a trace and put a paper bag on his head to start a real hunt for you. Avoid any collisions with the main character, collect palms for profit as gold coins, dodge obstacles on your way in time and get to the finish line unharmed until it becomes a serious problem. The faster you learn to deftly pass the tests, the easier it will be for you later.