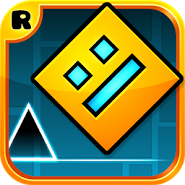 Geometry Dash – this is a hardcore 2D arcade game from RobTop GAMES, which in its dynamics is terribly reminiscent of Flappy Bird and similar arcade. Exactly the same exasperated and also can not break away for a second, while at least one unfortunate level will not be fully performed.

the game has 2 modes: practice, where you will see a save point that you can create anywhere on the level and normal mode, after a couple of minutes in which your nerve cells are strung like the strings you just tuned guitar.

the Game does not forgive mistakes and even the slightest misstep will lead you to the very beginning of the level. Time after time you be undergo the same, until you get to the finish line. Or you just will pass the nerves and you will move on to something else, less stressful. For what you would like to play again and again the game uses different "hooks" in the form of amazing soundtracks that are played only in normal game mode and in case of any error start from the beginning. Note that the developers have taken care of the opportunity to download these masterpieces right from the app. There is a separate button in the main menu.

Graphics Geometry Dash has a neon style, which is conjunction with an electronic soundtrack goes well with the pace of the game. The only thing that spoils the overall picture is the lack of synchronization of gameplay with the musical component. Geometry Dash — this is not a rhythm game, and the way she tries to seem at first glance. A distinct sense of trying to create music for a particular level, but a full sync between them. I'd like to.

the Control is performed with a simple tap in any area of the screen. The game responds well to pressure, but there is one unpleasant nuance — is the delay. To her, of course, can be used, but not mentioning its presence, we could not.

the Result: Despite the above disadvantages, the project RobTop GAMES definitely is a demonstration that even simple, from a graphical point of view, platforming can seriously tighten. Built-in map editor and a great soundtrack will not let you get bored for a minute. We recommend this project to educate all lovers of quality platformers. Try it, you won't be disappointed!

PS: If you are interested in this game, the game has a second part Geometry Dash World 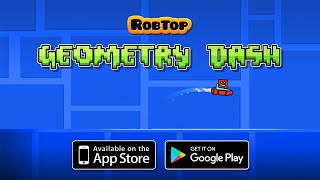 Comments to Geometry Dash on Android