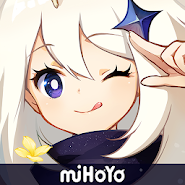 Genshin Impact - RPG with open world in the style of anime on Android. The game has a number of attractive features: freedom of action, well-developed battle system switching characters, attractive graphics and attention to detail. The action of the game takes place in the world Tawat where all profess the religion of "the Seven". Many years ago the gods of the elements gave mankind civilization, but the world soon fell apart because of corruption and greed. The gods watched from his abode in Heaven and chose worthy to sit next to them and maintain a balance that keeps the world safe and sound.

Comments to Genshin Impact on Android