Game Dev Story - a fun business simulation game in which you have to take control of a company to develop computer games. The creation of Game Dev Story was engaged in Studio Kairosoft, has released a series of simulations is known for its original approach, combining pixel graphics and thoughtful gameplay.

Having at its disposal not a large company your job over a period of 20 years of gaming to turn it into a profitable business system trying to create a mega-hit game. Hiring staff, improving their skills and abilities, improving working conditions, performing various tasks, eventually you will be able to achieve this goal. On completion of the allotted period will be summed up and depending on the results achieved, you will receive a reward, but it's not only premium, but also extra game modes and features that will allow you to pass the game on more than one occasion. Another feature of Game Dev Story for Android is a highly customizable game console that will allow you to create your own interface. 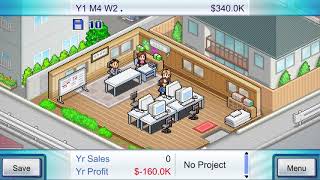