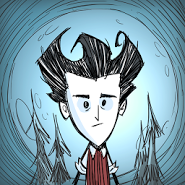 Don't Starve Pocket Edition is the Android version of the famous role-playing games of the genre roguelike. Original title Don't Starve can be translated as "not fast" and if you decide to try their hand at the characters you'll immediately understand what I mean. The PC version was released in 2013 and won unprecedented popularity among fans of the genre and now, after 3 years of mobile device owners have a chance of survival.
In General, the mobile version is largely similar to the original, but of course not without the necessary changes. However, the main features, game mechanics, graphics, randomly generated levels, no right for mistake all present. So if you're a fan of roguelikes or just serious rolevok, then Don't Starve Pocket Edition is for you.

How to improve graphics?

1) Install the prog SecondScreen
2) Go to it
3) on the bottom Right will be a plus.
4) adds new profile.
5) In vladochka where defaultno will be written TV(1020p) to select TV(720p). Can and 1020p but will graying fps or notebook. Suggest 720p
6) under the Title of the profile tipo : "Super Ultra Hyper Graphics 4 Don't tStarve
7) Save it and press Back. In the list in the middle will be your profile. Go into it.
8) from the Top tap on the large button : Load (profile)
9) Receive a restart of the system. A small bug with the boot not comfortable with voice input and a work Desk present. Don't worry. It will be for a second.
10) Ofigevayu why your machine turned into a tablet
11) log into the game and get Very high Quality Graphics, but do not forget! You can also get graying at the fps from 5 to 15 frames.
So if your old man hardly a game at 25 fps, to put it recovereda!
12) Also! You can improve the performance of the game, worsening the resolution of the screen (resolution). For example putting : 960х600. Graphics will become more blurred.

For that would run the Russian language, go to the game and then set the Polish! After restart the game, and enjoy.