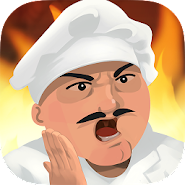 Cook, Serve, Delicious is a strategic restaurant simulator, one of the few in its genre that gives players full control over where they want to place their restaurant.

The action of the game is centered in an old, worn-out restaurant in SherriSoda Tower, which was once the heart of the building, but closed as business (and tenants) fell to an all-time low. But, as the local economy began to grow again, and occupancy reached its maximum, SherriSoda Tower decided to return the old Cook, Serve, Delicious restaurant and gave you full control over its creation.