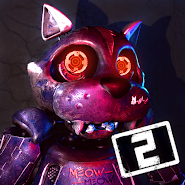 CASE 2: Animatronics The horror amusement park was closed due to a classified tragedy that happened, but 2 years later one of the police stations was attacked, and the evidence points to the involvement of the same criminals as then. Living through every emotion subject to Jack, who became a person involved in this difficult case, you will go through the story from beginning to end, which situation needs to be carefully monitored. Use the available surveillance cameras, quietly watch what's going on around.