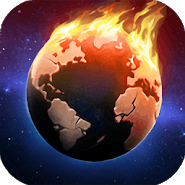 Carbon Warfare game is a disaster mainly based on the background of the fact that the greenhouse effect of the Earth serious and eventually leads to the destruction of the world. The player's task in the game is to increase carbon dioxide emissions and enhance the global greenhouse effect. MA will take appropriate actions to prevent the emission of carbon dioxide. Therefore, in the process of the game for successful destruction of the world requires certain number of strategies. There are many ways to destroy the world. Nuclear war, alien invasion or the impact of meteorites can destroy the world. Developers choose only the deterioration of the living environment of the person as the subject, which should remind the world that the problem of the living environment is important. If the environment will continue to deteriorate without restrictions, people will soon become extinct.

Comments to Carbon Warfare on Android