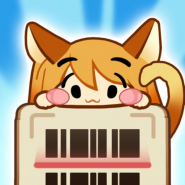 Barcode Fingermon - Once an experiment with a teleport went wrong and thus Dr. Phil called a fingermon by scanning one of the codes. After the incident, namely 3 years later, there was even a special sport for the battle of connectors with fingermons. Become a connector and collect a huge collection of various fingermons to later fight them in the champions League. Will you be able to acquire all 160 types of main characters, visit 4 types of major leagues, learn more than 50 special effects and fight the strongest bosses?

Comments to Barcode Fingermon on iOS