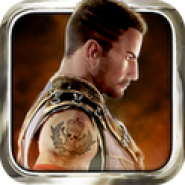 Backstab HD on Android in an exciting realistic adventure game you take on the role of Henry Blake in his pursuit of justice and exposing the traitor. Henry Blake, once an officer in England's Royal Navy, finds himself in the midst of a battle to protect the city from enemies. Reflecting the attack, he learns a terrible secret - his friend was a traitor and using hiding within the city walls of the invaders were stunned Henry and sent him to jail. And then the fun begins - you have to get out of prison and restore his good name by finding and exposing the traitor. Climb, jump and swim your way through various obstacles, use your deadly fighting skills to defeat your enemies and all who stand in your way.At your disposal the possibility of riding that will allow you to move a lot faster to locations. The control animal is the same as a hero, that is nothing difficult. Interestingly, a horse can simply steal or seeing the street rider, to throw it and pick up the horse.

Backstab HD is large enough and colorful world that has a set of traced elements, and for orientation in this space you are given a map. Its thumbnail is displayed in the upper left corner, and clicking on it opens a full map with all notes. In addition, in this menu you can view your inventory, quests, weapons, and statistics of the game. To help you there will be a pointer that shows which direction you need to go to accomplish the mission. By the way, the missions in the game range from simple, to carry a parcel to another location, until quite fascinating, to destroy several large ships. Control of the game is built in the most convenient, well-implemented combat system with combo attacks and special effects that make the battle dynamic and exciting.

Cache for Backstab HD: unzip the folder to /Android/data/
- path will look like this: /Android/data/com.gameloft.android.ANMP.GloftSDHM/
- install apk, launch the game!

Comments to Backstab HD on Android