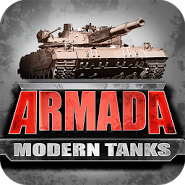 online Multiplayer action games on military issues increasingly occupy its own niche within the mobile platforms, and popularity is not inferior to similar projects on a PC. Every day there are new projects on this topic, and many of them quite worthy the attention of the players.
one of such projects include Armada : World of Modern Tanks massive online tank action game whose creators have turned their attention to the armored technique of the mid-20th century, you will be equipped with units such as the Leopard 2, T-90, not without extremely publicized today, T-14 "Armata". The rest is the usual multiplayer action on military subjects, destroy enemy tanks, earn experience points and money for future development.

Comments to Armada : World of Modern Tanks on Android