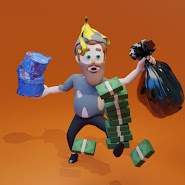 Arcade Homeless - Our planet is now considered very polluted, and it was we who turned it from a clean planet into a dirty habitat. Become a volunteer and seriously engage in street cleaning, collecting all the garbage around you and disposing of it in special tanks, which will then be taken to special recycling plants. Stop complaining about the garbage around, it's time to start collecting it yourself. Act before it's too late, because our planet also cannot withstand such a load from its inhabitants.

Comments to Arcade Homeless on Android