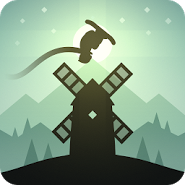 Studio developer Noodlecake is known primarily thanks to such projects as Zombie Road Trip, a series of pixel action games Random Heroes, and even a number of hit arcade games. And then the guys introduced a new horizontal runner called Alto's Adventure, this time deciding to pay attention to the atmosphere of the game.
gameplay Alto's Adventure is made by the classical scheme, down the mountain on a snowboard, you have to try to overcome the greatest possible distance while avoiding obstacles, collecting awards and not performing difficult tasks. But the visual component is made is beyond praise, stylized graphics, dynamic changing time of day and weather events, randomly-generated levels.

Comments to Alto's Adventure on Android