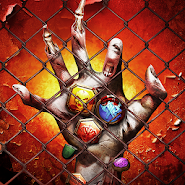 Zombie Quest Puzzles – an unknown virus has filled the city and the whole country, the majority of people died, others suffered a terrible fate: they became the living dead. Now there's only one way out: lead the army of infected and destroy the zombies. They become more cunning, be clever and solve tricky puzzles to annihilate the entire army. Move the perimeter further and clean areas on maps. Obtain necessary resources and construct weapons, upgrade abilities, and give peace a chance.