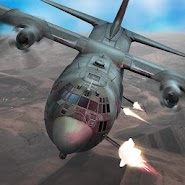 Zombie Gunship - aviation zombie shooter which the developers found a rather original solution, placing the player in combat aircraft armed with various weapons, from small to serious gun barrel, the aircraft model exists in reality borrowed from the US army. Everything else the game creators have managed to implement all the sights and the technical capabilities used in AC-130, so you will be in relative safety at height while well armed and with impunity to shoot the walking dead.
and now, after some time, the Studio flaregames has pleased us a logical sequel called Zombie Gunship Survival, that is retaining all the main features of the first part got a lot of new and interesting things.