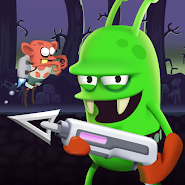 it is Difficult to disagree with the fact that the theme of zombie Apocalypse was pretty boring to gamers, but in a series of similar and mediocre arcade games there are also quite worthy examples such as clan war .
the game's Plot develops in the distant future, the surface of the planet Earth is infested with the walking dead and salvation from them just yet. But the happiness of mankind two intergalactic businessman decided to open his business on Earth, and in return offers to save mankind from zombies. However, humane aliens are not going to destroy eaters of brains, and just want them all to catch. However, the insidious zombies are not going to give up, so our heroes will have to use ingenious traps to catch zombies. Oh and the cleared spaces of the aliens will be able to build the desired food, you also have to help them.

Comments to Zombie Catchers on Android