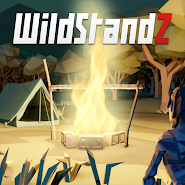 WildStandZ - Unturned Zombie - the new realities are significantly different from the old ones, because now for survival in the world you have to destroy people who have been swallowed up by a terrible virus. It can be said that the infected have lost control of their brains, and now they are considered dead, risen to eat human brains and flesh. Assemble a team of survivors and create a real shelter in a certain area, accumulating a large supply of weapons and resources. Get ready to go through any trials: hunger, thirst, cold, heat, fights with bandits and so on.