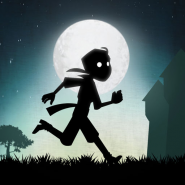 Vive le Roi – a fun platformer on IOS, where you will save the king from death. This game takes you to France during the reign of Louis XVI. The country erupted into revolution because of the numerous protests and discontent of the people. Supporters of the revolution decided to execute king Louis XVI in the streets of the city. Your task in this game is to Wade through the numerous guards and release their king from captivity. Solve challenging puzzles and puzzles and pass the challenging levels of the game. Ahead of you are more than 30 levels, lots of traps and puzzles, and the game will give you a great story and interesting gameplay.