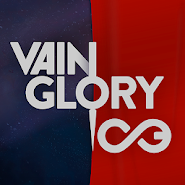 Vainglory – awesome online strategy game done in the style of MOVA. Developed this game to former employees of well-known companies, such as Blizzard, Rockstar and Riot. In this game you will have a few characters, which has its own characteristics and its own super power. Your task will is to reach and destroy the enemy base.

Cache for Vainglory 5V5: unzip the folder to /Android/obb/
- path will look like this: /Android/obb/com.superevilmegacorp.game/
- install apk, launch the game!

Comments to Vainglory 5V5 on Android