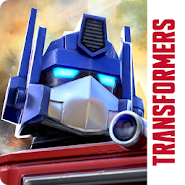 Transformers: Earth Wars – strategy for Android, where you will join the war tranformerov. In this game the fate of the Earth will be in your hands and only you will depend on further to consider the whole of humanity. In this game you will meet again with the famous heroes of the film the level such as Optimus Prime, Megatron, bumblebee, Grimlock, Soundwave, Starscream, and many others. Choose which of the two sides of you fight on the side of the transformers or the Decepticons who want to destroy the earth. Build your own impregnable base and defend it from the enemies while collecting energy reserves and building space bridges to call for backup. Destroy enemies using laser guns and other powerful weapons and fight players from around the world.