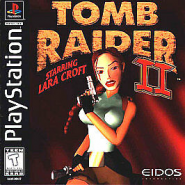 Tomb Raider II - Lara Croft must at all costs find the mighty dagger of the Xi'an on the territory of Tibet, China, Venice and the bottom of the oceans, as it is, according to legend. has the power of a dragon, which is automatically transferred to the owner. During the passage of 17 difficult levels, she will face not only obstacles prepared by fate, but also other seekers who also want to get power. Grab at least a few weapons for each of the missions, as there will be quite a lot of opponents on your way.